I will start with why Kasey was early. The backstory is that Jack and I had many losses before Kasey. We got married in October 2007 and were excited to start a family. In December, we found out we were expecting and were so excited. All went well until March 14th, I woke up with cramps that progressed over the day. I called the Ob-Gyn but they insisted it was a urinary track infection and ordered me a script. I ended up delivering the baby in the ER at 16 weeks. We were devastated. I got testing done because we had no idea why we lost the baby. So even though it was my first loss, they did the RPL (Repeat Pregnancy Loss Panel) testing. Despite it coming back saying that I had two clotting disorders (Factor V Leiden and MTHFR) the ob-gyn chalked it up to “bad luck.”

We did get pregnant with twins shortly after. I found a high risk doctor who put me on daily injections of the blood thinner Lovenox. I asked about baby aspirin. I was told that if I had three disorders they would consider it, but that it was not needed now. We lost the first twin at 9 weeks and the second twin started measuring behind more and more every check up. The high risk doctor gave me a list of all the things he thought were wrong with the baby. I asked about the clotting disorders, and he said maybe but most likely there was something wrong with the baby. Of course that did not matter to us. I am a special education teacher and felt we could handle anything. We ended up delivering our Catherine Louise at 24 weeks stillborn. She measured about 18 week size. Her placenta was clotted and discolored and it was obvious that she was not getting the nutrition and blood flow that she needed to sustain and survive. Her autopsy showed no chromosomal abnormalities.

So the clotting disorders were very obviously to blame. We explored this some more and found I have one more clotting disorder. One more loss at 6 weeks. Multiple visits to a Reproductive Endocrinologist. Just before starting medicine to help us conceive, we were surprised to learn that we were expecting again. The HCG levels (pregnancy hormone) were very low (8) when 5 is not pregnant and 25 is pregnant. I thought we had another loss on our hands. I actually felt like let’s get this loss over with and start the meds. But they say, as long the number doubles you are okay. Our next number was 17; still in the grey area. But just like Kasey started out small and slowly grew, the numbers increased. We were on our way to Kasey joining us! 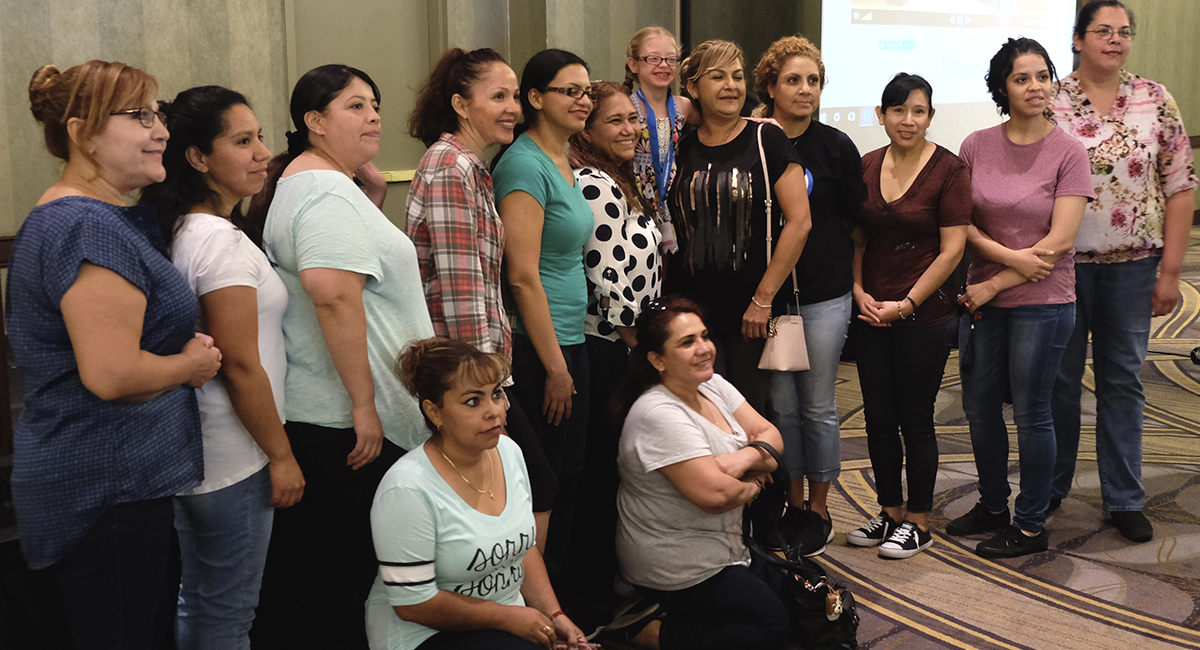 I tell all this to show what we went through. I know that in addition to our love for each other, our tough journey really helped Jack and I know that we could make it through anything. All the time in the NICU, we were just grateful for each day we had with Kasey; that she was here with us and we had a daughter to do kangaroo care with, look at and have hope for.

During Kasey’s pregnancy, Jack gave me my 2-times-a-day dosages of Lovenox shots in my belly (I hate needles!). I also took baby aspirin, which I think was very important to take, along with other meds. She started to measure behind around the same time Catherine did. Her amniotic fluid was low and the blood flow from placenta was not good. Our new high risk doctor told us that he hoped to get her to 2 lbs because then she had a good chance in the NICU. We kept monitoring, I tried to eat more than enough to help her gain so she would be heavier whenever she was born. I drank tons of water, rested, got steroid shots for her lungs, etc.

Then came the day when my doctor felt she was not going to make it much longer. The blood flow was too poor. He said Kasey would grow better in the NICU than in me, which was true. I got magnesium sulfate overnight to help with her brain. I had a visit from the NICU doc who went over chances for survival and what they would do with her. I had a C-section the next morning at 26 weeks and she arrived at 1 lb 5.3 oz and 11 1/2 inches. I was too scared to look and know if she made it or not. Jack looked and I asked if she was bigger than Catherine and the doctor replied, “yes.” We heard a little bitty cry. I got a glance at her and they all headed off to the NICU with her.

She was on CPAP and O2 for 18 hours then needed to be intubated and placed on the oscillating vent. Day by day we learned all the new terminology and awaited her blood gas results We were thankful she did not have any brain bleeds. We watched her monitors and witnessed some of her 11 total blood transfusions. I pumped so she could take 1 cc of milk and build that up to “full feeds” via feeding tube.

We had a horrible day where we almost lost her and they all surrounded her talking about what else they could do with the saddest faces that scared me. Her O2 was at 100%; the oscillating vent topped out. They tried jet vent and that was not working for her either. Her CO2 was over 100, to the point they shut off her tcom and machine so we would stop watching it. They started her on steriods and brought in what looked to me like astronaut gear. It was Nitric Oxide. (This began what we called ” Kasey’s Nitric Oxide habit.” It always did help her.) 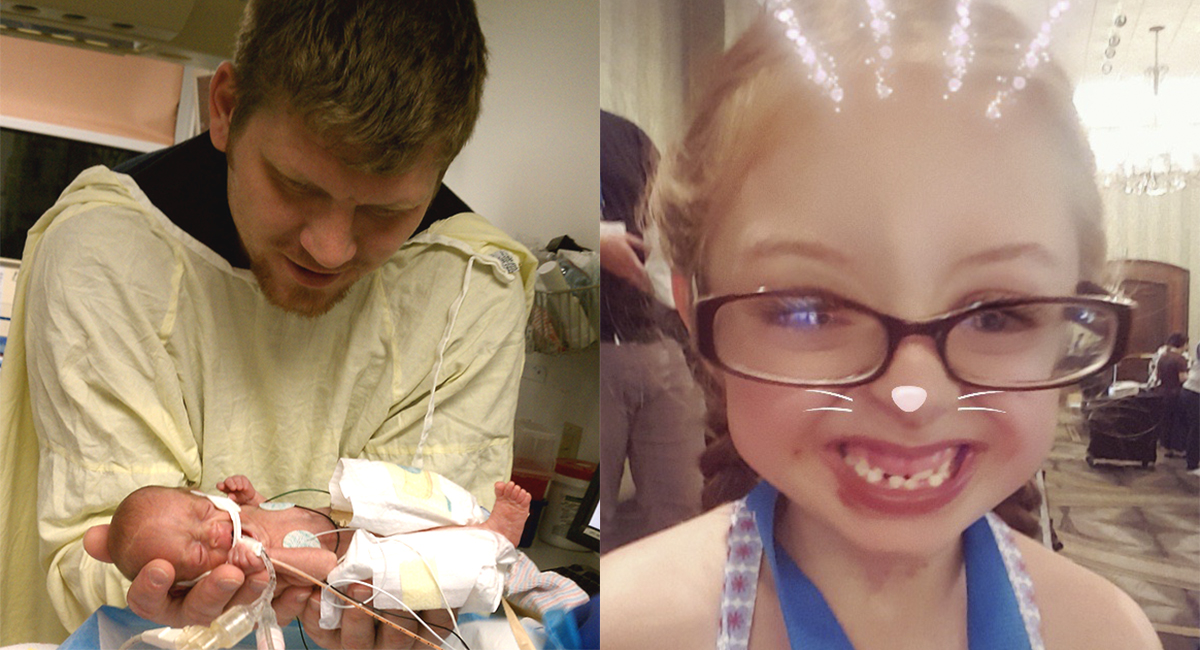 Kasey rebounded and continued progressing at her pace. We celebrated every gram and ounce that she gained, we loved weigh in days. We began to take turns holding her skin-to-skin (kangaroo care) and would pretend to lie… “No it’s my day, you held her yesterday!” Or when the nurse asked whose turn it was to hold her, we would both respond, “mine!” But we were fair about it.

She was extubated after about a month and tried CPAP, Bi-PAP, Si-PAP, a high flow nasal cannula, and, one day, even a regular nasal cannula. After four months, Kasey was transferred to Children’s Hospital of Philadelphia for a trach eval. (Not before they put decorations and gave her(us) a cake for her 100th day. Two months later, she had surgeries for a tracheostomy, nissen fundoplication and a g-tube.

Kasey was able to come home one summer day when she was 299 days old, a sweet 13 pound, 10 month old baby who had only been outdoors about six very monitored times in her life. She was still on the ventilator and oxygen 24/7 and all feeds were through her g-tube.
Once home, Kasey was able to start to get to know family and be around kids. We did take a lot of precautions and really limited guests during RSV and flu seasons. She worked hard to make up for lost time by getting speech, OT and PT and continues to receive all three at school. She was allowed to start trying to eat by mouth at one year, and progress has been slow. Kasey still struggles with eating and still has her Gtube.
She still gets sick easier than most and often develops pneumonia each time. She does have chronic lung disease and pulmonary hypertension and takes 10 meds a day.  She needs to wear oxygen at night. She also has a hole in her heart that may need to be surgically closed one day.
Kasey is in 2nd grade and excels in reading. She takes piano and horse back riding lessons and is a Girl Scout. She does have difficulty focusing and controlling her impulses at school and has a diagnosis of ADHD. She loves to joke, play and just be a kid, though she truly has an old soul.

There really is something special about this girl. She has a captivating spirit that we love sharing with the world. We can’t imagine life without her.